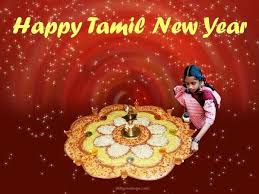 Happy New Year! Surprised to see this greeting more than four months after Jan 1? Well yesterday was the Tamil New Year or Puthandu/ Varusha Pirrapu as it’s called in Tamil, which is the first day of the Tamil New Year as celebrated by the Tamil diaspora across India, Sri Lanka, Singapore, Malaysia etc. This is one of the very few festivals which is celebrated keeping the solar calendar instead of the lunar calendar (which is mostly the norm for Hindu festivals) in mind.

The Tamil New Year follows the Nirayanam vernal equinox and generally falls on 14 April of the Gregorian year. 14 April marks the first day of the traditional Tamil calendar and is a public holiday in both Tamil Nadu and Sri Lanka. The Tropical vernal equinox falls around 22 March, and adding 23 degrees of trepidation or oscillation to it, we get the Hindu sidereal transition or Nirayana Mesha Sankranti (the Sun’s transition into Nirayana Aries).

Hence, the Tamil calendar begins on the same date observed by most traditional calendars in India as in Assam, West Bengal, Kerala, Manipur, Mithila, Odisha, Punjab, Tripura etc. not to mention Nepal, Bangladesh, Burma, Cambodia, Laos, Sri Lanka and Thailand. The 60-year cycle is ancient and is observed by most traditional calendars of India and China, and is related to 5 revolutions of Jupiter, or to 60-year orbit of Nakshatras (stars) as described in the Surya Siddhanta.

Tamil people celebrate Tamil new year on 14 April. This is the month of Chittrai, the first month of the Tamil solar calendar.  In the temple city of Madurai, the Chittrai Thiruvizha is celebrated in the Meenakshi Temple. A huge exhibition is held, called Chittrai Porutkaatchi. The day is marked with a feast in Tamil homes and entrances to the houses are decorated elaborately with kolams. In most parts of India, one can see neem trees blooming with their flowers and the first batch of mangoes hanging prominently. This day is celebrated by some communities with neem flowers and raw mangoes to symbolize growth and prosperity.

On the day of Tamil New Year, a big Car Festival is at Tiruvidaimarudur near Kumbakonam. Festivals are also held at Tiruchirapalli, Kanchipuram and many other places.

Growing up, this festival used to be smack bang during our final exams and so it not really on our radar. Depending on the exam schedule, we would have exams going on, or it would be the last exam. I do remember my mother getting new clothes for us for that day.

Since it is a holiday in Tamil Nadu, food prepared used to be the festive one with all flavours in it – sweet, sour, salty, bitter and spicy. But since it was a normal working day for us in Mumbai, food used to be the usual day-to-day food. But one other thing I do remember my mother making is Mango Pachadi, which is made from raw mango, jiggery and neem flowers (Azadirachta indica) and is a medley of flavours – sweet, sour and bitter. This is to indicate that the coming year be full of different flavours for everyone in the house.

This site uses Akismet to reduce spam. Learn how your comment data is processed.