An Arabian Journey: One Man’s Quest Through the Heart of the Middle East – Levison Wood

Following in the footsteps of famed explorers such as Lawrence of Arabia and Wilfred Thesiger, British explorer Levison Wood brings us along on his most complex expedition yet: a circumnavigation of the Arabian Peninsula.

Starting in September 2017 in a city in Northern Syria, a stone’s throw away from Turkey and amidst the deadliest war of the twenty-first century, Wood set forth on a 5,000-mile trek through the most contested region on the planet. He moved through the Middle East for six months, from ISIS-occupied Iraq through Kuwait and along the jagged coastlines of the Emirates and Oman; across a civil-war-torn Yemen and on to Saudia Arabia, Jordan, and Israel, before ending on the shores of the Mediterranean in Lebanon.

Like his predecessors, Wood travelled through some of the harshest and most beautiful environments on earth, seeking to challenge our perceptions of this often-misunderstood part of the world. Through the relationships he forges along the way–and the personal histories and local mythologies that his companions share–Wood examines how the region has changed over thousands of years and reveals a side of the Middle East we don’t often see in the media.

I’ve made Hummus years and years back when I was on a food experimentation drive. The past few weeks, in a bid to increase good protein, I was thinking of making hummus again, but somehow this did not happen. Then the other day, I read about someone who was raving about Tesco’s caramelized onion hummus and I was intrigued. This made me want to try making hummus again, and also try it with caramelized onion. As luck would be, I also had some dry chickpeas or garbazano beans which were going to go bad soon and so this recipe of hummus soon saw the light of the day.

When I made Hummus earlier, I didn’t add Tahini paste to it, thinking I won’t get it here in Singapore. Then when I went online and found how to make it, I realised it was very simple and so this time, I made it as authentic as I could….

For the Tahini Paste

I usually eat this plain, or add in my red chilli chutney and eat….

From the Holy Mountain: A Journey among the Christians of the Middle East – William Dalrymple 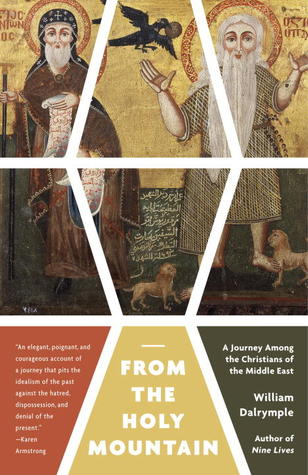 Using Moscho’s writings as his guide and inspiration, the acclaimed travel writer William Dalrymple retraces the footsteps of these two monks, providing along the way a moving elgy to the slowly dying civilization of Eastern Christianity and to the people who are struggling to keep its flame alive. The result is Dalrymple’s unsurpassed masterpiece: a beautifully written travelogue, at once rice and scholarly, moving and courageous, overflowing with vivid characters and hugely topical insights into the history, spirituality and fractured politics of the Middle East.