When I woke up this morning, the first thing I thought of today was my paternal grandmother. Somehow I kept thinking about her and thought I should dedicate this post to her.

My paternal grandmother, whom I called ammama was a remarkable lady. Ammama in some Tamil dialects and in Malayalam actually refers to your mum’s mum but I used to use it interchangeably for both my grandmothers! 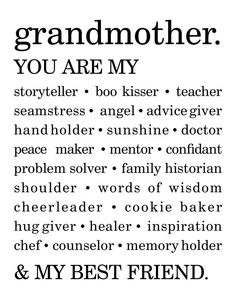 Actually, there’s a story to why I called her ammama. Growing up, it seemed normal to me to call both my grandmothers by this name. I realised that it was different when I heard others call their grandmothers pati which in Tamil means grandmother. But I never really gave it a thought. Following my example, my sister and later other cousins from my maternal side also started calling our maternal grandmother as ammama and used to call their paternal grandma as pati. Years later, probably after I became a mother myself and my mother became a pati, I asked her why I used to call my grandmothers ammama? Her answer actually made me pause because apparently, it was my paternal grandmother who wished that I used this name to call her. I never had the chance to ask her this question, but I guess she must have been quite young when I was born and a streak of vanity in her didn’t want her to officially become a grandmother so young! So by making us call her ammama, she didn’t become a pati, yet we had a unique name to call her.

She was married to my grandfather when she was around 9 years old and came with him to Bombay (as it was then called) sometime in the early 40s. She was not very highly educated, she probably just finished high school, but was a very voracious reader. My dad always tells me that my love for books most likely came from her.

In addition to being a reader, or perhaps because she was a reader, she was also very skilled in telling stories. I remember countless nights when I was very young when my sister and I would huddle against her and listen to stories before bedtime. She was the one who introduced mythology to us and would regale us with stories from the Hindu pantheon. She was also quite good at making up stories with the prompts we gave her and now I wish I had recorded those stories to share with BB & GG.

When I was around six years old, she moved away, first to a city in Western India and then to a city in Southern India because of my uncle, who was considerably younger than my father, and who was single then, moved for work. My grandfather had retired by then and so they decided to spend their last years away from the hustle and bustle that Bombay had by then become. They loved the southern city they finally moved to and when my uncle got married and moved away, they decided to stay there permanently. They first rented and then bought their own home there which my ammama lovely restored (the house was being used as student accommodation when they brought it so you can imagine the condition it was in).

We, especially I, waited impatiently for ammama to come to Bombay for their trips and when she was there, I probably forgot my parents completely. It was always ammama this and ammama that for me for the month or two that she was with us. I also used to wait for the summer holidays to come so that I could go to spend time with her. In case you wonder, it was not all a bed of roses with her too! She was very traditional and conservative and I used to chafe at the restrictions she used to put on us, especially some which I never understood since we were girls. For all her conservatism and traditions, she was also quite liberal in her outlook and encouraged my dad to give us far more freedom in terms of what we could do (within reason and boundaries) as compared to other girls around us. Perhaps this stemmed from what her daughter, my aunt went through in life which she didn’t want her grand-daughters to go through too.

The last time I spent time with her was when I was starting my class 12 year (equivalent to the A-levels in India). Since the exams would end much earlier, we had made plans before leaving that I would travel alone to be with her for a whole month before my mum and sister came. I was so excited going back to Bombay that I was making plans in the train, a whole year before the trip! She and my tatha were travelling on the same day to another city to attend a wedding and we had gone to the station together. Their train was before ours and so we said our goodbyes at the station. We reached Bombay late at night the next day and the day after that, around 5:30 am, we got a call from one of my dad’s relatives that she had passed away! She had a massive heart attack at the wedding venue and before she could get any medical attention, she passed away!

Writing this last sentence brought tears to my eyes, even now, more than a quarter of a century after the event! My parents rushed back to her town and left us back in Bombay. I never got a chance to say a last goodbye to my beloved ammama, which at some level, still rankles me, even today! When I first started writing this piece, I was happy sharing my memories about my ammama, but the last paragraph made me sad! I am still happy that I have these memories with me, I have friends who have no memory of their grandparents at all!

My maternal grandmother is still alive and healthy for her age and I am glad she is around. My children have and know their great-grandmother and she knows her brood of great-grandchildren!

Writing this post has been difficult, yet cathartic for me. Do you have memories about a favourite grandparent? Do share!

This site uses Akismet to reduce spam. Learn how your comment data is processed.